There were many great individual success stories at the 2017 Australian Open. The comeback of Venus Williams to reach the finals against her sister was a dream come true for tennis fans. The return to glory for Federer and Nadal was even more spectacular because neither was expected to reach the finals.

Federer’s first Grand Slam seems like it was light years ago. George Bush was midway through his first term as U.S. President and Chicago won an Oscar for best movie of the year.

Other players have won only 11 events. Stan Wawrinka and Andy Murray have both won 3 Slams each and there were five “one-hit” wonders. In other words, only 10 different men have hoisted a Grand Slam trophy since Wimbledon 2003.

Of those 11 Slams that the big three did not win, one member of the trio was in the finals of six events. Since Wimbledon 2003, there have been only 5 Grand Slam finals that did not include Federer, Nadal, or Djokovic.

If this was baseball, fans would be hollering, “Break up the Yankees”.

At no point during this period of 55 Grand Slams has an American captured a championship. Andy Roddick was the last American to appear in a slam finals (2006 U.S. Open). Andre Agassi retired at that event, leaving Roddick as the top American male player.

The combination of Agassi’s retirement and the depth of great European players has made it rough sledding for the American men. That was evident at the 2017 Australian Open.

Fourteen American men were entered at Melbourne. Eight of them started out strong. First round losers included 6 players: Michael Mmoh, Jared Donaldson, Taylor Fritz, Reilly Opelka, Bjorn Fratangelo, and Donald Young. With the exception of Donald Young, the other five are part of the youngsters who are making the transition from solid junior careers to the professional circuit. There is reason to be optimistic they will become strong contenders in the next 2 to 3 years.

Things took a turn for the worse in the second round when John Isner, Ryan Harrison, Noah Rubin, Steve Johnson, Frances Tiafoe, and Ernesto Escobedo were ousted.

The remaining two American men, Sam Querrey and Jack, Sock lost in the third round.

Overall, the American men won 10 matches while losing 14. Hopefully better times are in store for the young American men.

As for Federer and Nadal… wouldn’t it be great if they reached the finals of several other Grand Slams this year? 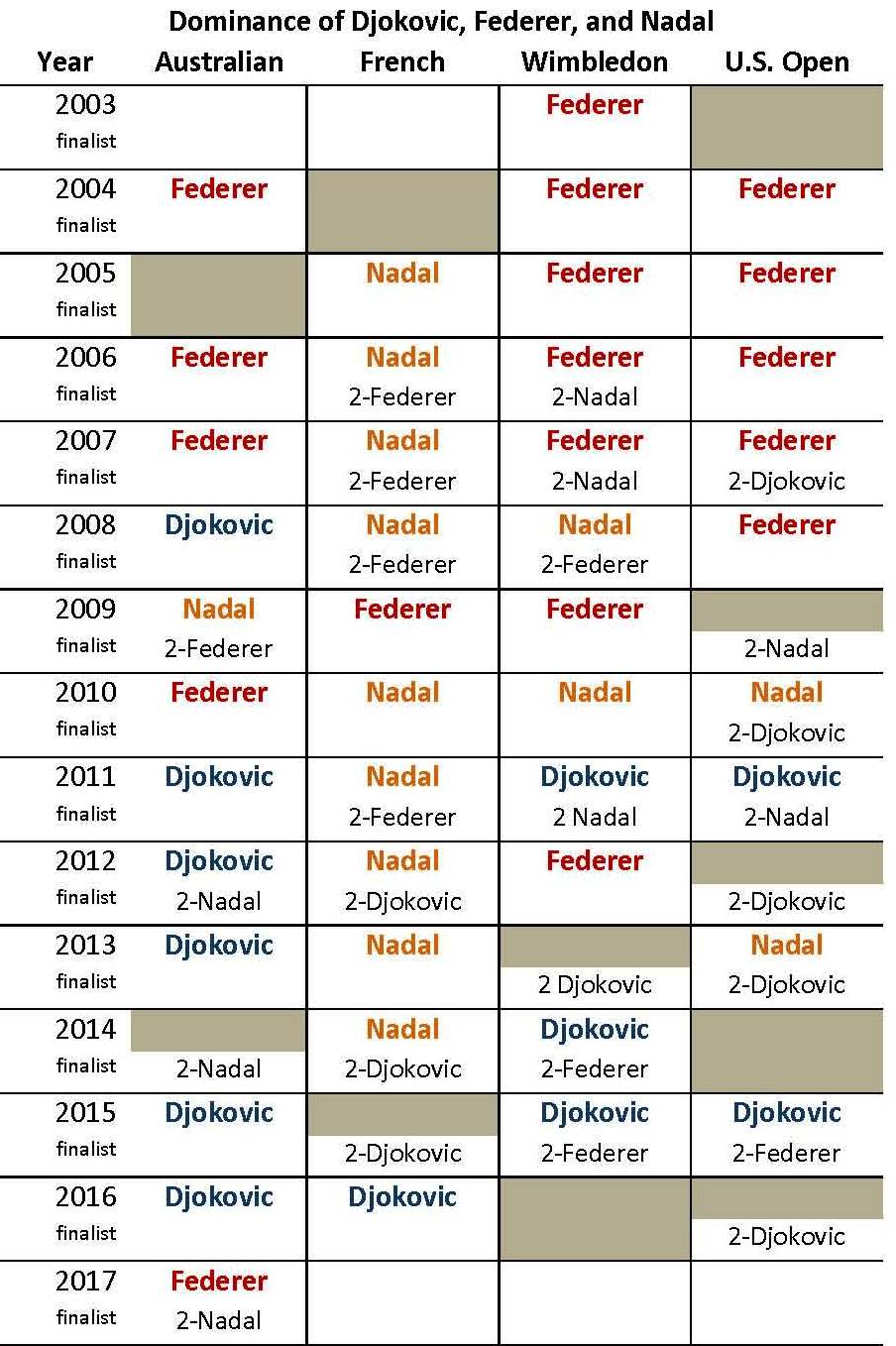